Growing up in Washington, D.C. Marita Golden’s gifts as a writer were recognized when she was a child and encouraged by her parents. Her mother told her when she was twelve, that one day she was going to write a book. From poems and articles in the high school and college newspapers, Golden moved in her twenties to free-lance writing for publications as diverse as Essence and the New York Times. She is also the author of fourteen books of fiction and nonfiction.  The Black Caucus of the American Library Association awarded Marita Golden an Honor for GUMBO an anthology of fiction by African American writers which she edited with the late E. Lynn Harris, and the Literary Award for Fiction for her novel After. And it’s this book that I’m so thrilled to share with you as this week’s Great Read! 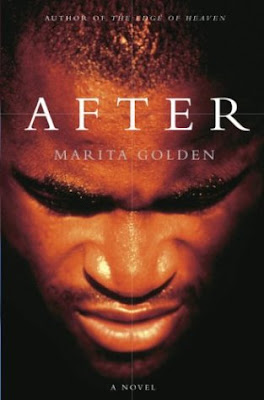 For twelve years Carson Blake inhabited a world of his own creation. Scorned by the father who was incapable of showing him affection and nearly consumed by the mean streets of Prince George’s County, Maryland, Carson did what no one else could: he saved himself.

After joining the police force and building a family with his wife, Bunny, Carson is finally in control of his life in the enclave where African American wealth and privilege shares the same zip code with black American crime and tragedy. Both Carson and his wife have great careers and three beautiful children: Roslyn, Roseanne, and Juwan. Carson is a devoted father, determined not to be the father that Jimmy Blake was to him. But while Juwan’s astounding artistic talent is his father’s pride, the boy’s close relationship with classmate Will conjures up emotions and questions in Carson that threaten to spill over and poison the entire Blake family.

And then, one night in March, nearing the end of a routine shift, Carson stops a young black man for speeding. He orders Paul Houston to exit the car and drop to his knees. But when Houston retrieves something from his waistband and turns to face Carson, three shots are fired, one man loses his life and two families are wrenched from everything that came before and hurled into the haunting future of everything that will come after. When it is revealed that Paul, a son of educators and a teacher in Southeast D.C., was only holding a cell phone, Carson’s carefully woven world begins to unravel.

After is a penetrating work of discovery for a man whose life careens more than once off the edge of disaster. Golden’s astounding prose will stay with you long after you’ve turned the last page.

What do readers say?

“The plight of the black man has never been as magnified as it is in recent times. Albeit, and with much fanfare, there have been a plethora of books detailing the ills but rarely solutions. Now comes a brilliant story told from the imaginative mind of erudite scribe, Marita Golden with a book entitled, AFTER. This, her latest offering delves into the life of Carson Blake fighting demons that threaten to consume him lest a plan of salvation can be part of saving grace. Urban angst, coupled with dysfunctional familial life can wreck havoc and leave scars that are definitive of years of strife. Much should be said about the brilliance of illuminating light when a stand is made for challenge and change. Blake’s stupendous effort to do just that makes this novel worth reading for redeeming value and for the mere triumphant nature of another black man pulled up from the depths of despair.”   – A.C.R

Or buy AFTER today from Amazon.com!