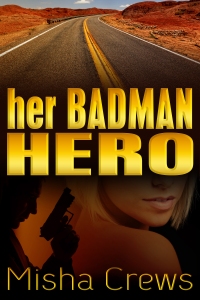 Anna Malkin was a single mother on the brink of a life-changing promotion in her small New Mexico bank. Clayton George was a desperate outlaw, struggling to go straight.

Thrown together by circumstance, bonded by danger, Clay and Anna must race through the New Mexico desert toward an uncertain fate. As they speed along the dusty back roads, with deadly enemies at their heels and their lives on the line, will passion save them… or will it be their undoing?

Through the clear glass panels that served as the walls of her office, Anna watched two men in dark jackets push through the doors of the bank. Her grip on the phone slackened, and the earpiece drifted away from her ear. The distress of her phone call was forgotten, momentarily snuffed out by a whole new anxiety that she couldn’t quite place. Her heart skipped into high gear, and she lifted her head instinctively, like an animal scenting the wind.

Why was she getting so agitated? On the surface, everything about the men seemed normal. One was tall, almost hulking, with broad shoulders and shaggy blond hair. The other was shorter, compact, with dark hair. Both were wearing sport jackets, jeans, and work boots. They looked like small business owners: contractors, maybe. Ordinarily the sight of new customers was cause for celebration, especially when it seemed like they could be bringing much-needed commerce into the tiny town of Oliver, New Mexico. But Anna’s inner alarm was clanging, creating an uncomfortable buzz of electricity under her skin. No, something was just not right.

“Anna.” Her ex-husband’s voice came through the phone, aggravated and thin-sounding. “Anna, are you still there?”

She took a breath as she brought the phone back to her ear. One catastrophe at a time. For her son’s sake, she tried to stay calm and be polite. “Bob, I’ll have to call you back.”

But Bob was already talking again. Usually he was nonconfrontational, rarely interfering with Anna’s parenting. But today, riled by the unhappy phone call he’d received from their son, he had become forceful and insistent. “Elliot’s really upset with you,” he told her.

The men had come to a halt in the tiny lobby and were standing with an air of bored expectation, waiting to be helped. Of the two, it was the smaller, dark-haired man who held her attention. His face was turned away from her, but her eyes absorbed the few details that she could see. His hair was dark and cut short against his head. He was on the small side compared with his large, blond companion, but his shoulders looked solid and strong beneath the sheath of his sport jacket, and something in the clench of his jaw spoke of definite authority. He was either the senior partner or the older brother. Whichever it was, Anna had the feeling that he was in charge. And for some reason, she also had the feeling that he didn’t like it.

Her eyes searched for Tony, the assistant bank manager. “Of course Elliot’s upset,” she said into the phone, working to keep her tone mild. “He’s a twelve-year-old boy, and I’m his mother. If he weren’t upset with me, I’d be doing something wrong.”

The words were a lie, a disguise for the stinging gash where her son’s anger had whipped her that morning. But Bob didn’t need to hear that, didn’t need to know that she was speaking through a fog of injured worry. Ultimately, this issue was between her and her son. Letting Bob have his say was just generosity on her part.

“Twelve is almost thirteen,” Bob answered, “and thirteen is old enough to decide where he wants to live.”

Thanks for the reminder, she wanted to say. But instead she heard her normally placid voice reply briskly, “That may be true in a legal sense, but…”

The dark-haired man looked at his watch. It was a common gesture: stretch out arm, bend elbow, look at watch. So why did it make her voice catch in her throat?

Anna leaned forward in her chair. Did she know him from somewhere? Maybe she had seen him around town: waited behind him at the grocery store or stood next to him at the gas station. Maybe it was some chord of memory that was shrilling and not her nerves.

At that moment, as if he could feel her watching him, the man turned his head and met her stare.

His gaze was as black as his hair and had the weight of physical contact, as if he had reached out and laid a hand on her shoulder or cupped her face in his hand. His lips were pale and pressed thinly together.

As they looked at each other, his jaw loosened and his lips parted slightly.

A burst of heat came across the room, like a gust of desert air. It hit Anna low in her stomach, boiling the blood in her cheeks. She felt a blush flame over her face and dropped her eyes. Anxiety was shoved aside by embarrassment.

No, she realized, she didn’t know this man. And no, it wasn’t some internal alarm that had made her zero in on him. It was attraction, plain and simple. She just thought the guy was good-looking. Had it really been so long since she’d experienced that tug of physical attraction that she’d actually mistaken it for danger?

“But what?” Bob prompted. He waited a beat and then asked, “Are you okay?”

“I’m sorry,” Anna heard gravel in her voice and cleared her throat. “I have to go now. We’ll talk about this later, all right? Bye.” She hung up the phone without waiting for a reply, ignoring the sound of her grandmother’s voice in her head: You treat that husband of yours like he was a child, so how can you expect him to act like a grown man?

Bebe had been right about that, as she was about most things.

Anna shuffled papers on her desk, trying to look as if she was hard at work. She could still feel the dark-haired man’s eyes on her. His hot, black gaze was burning into her. She knew she should do her job as temporary manager: get up and go see what these men needed. But she couldn’t even bring herself to lift her head, much less leave her office. And as for talking to this man, who had such an unexpected and unwanted effect on her? No, she didn’t see herself doing that any time soon.

Suddenly the door of her office swung inward. She jumped slightly, first embarrassed at having been caught cowering at her desk, then relieved for the interruption. The door had been pushed by a pretty young teller in the middle stage of pregnancy, who was accompanied by an elderly lady in a blue coat.

Anna smiled and stood up, hoping some of the red had gone out of her cheeks. “Well, goodness,” she said as she moved out from behind the desk. “Two of my favorite people coming through the door at the same time. It must be my lucky day.”

The elderly woman came forward, hands outstretched. Her face lit up when she saw Anna. “Just look at you, working here in the manager’s office, with your name on the door. Your grandmother would be so proud of you.”

As Anna clasped the woman’s hands, she exchanged a glance with Rena, the pregnant woman. Rena gave an indulgent smile and shrugged her graceful shoulders. Mrs. Ramirez had been into the bank several times over the past few days and had said the same thing on each visit.

“Thank you so much,” Anna replied, as she had before. Mrs. Ramirez had been Bebe’s best friend. “Hearing that from you is almost like hearing it from her own lips.”

The words weren’t any less true just because she had said them three times already this week.

Mrs. Ramirez’s gaze was affectionate and knowing. “I remember you when you were a little girl; making your grandmother proud was all you wanted.”

“I guess some things don’t change.” Anna tried to return the lady’s smile, but she felt tears gathering and she blinked them back hurriedly. This was not the time or place to get emotional. It was only the second week that she’d been filling in for the manager, Mr. Simon, who was out on medical leave, and Anna still had a lot to prove, if only to herself. Not to mention the fact that the extra income from a permanent promotion would be a godsend. “She was such a wonderful woman. And so strong.”

From the corner of her eye, Anna saw the two men in black talking to Tony, the assistant manager. He nodded his head and led them to the back, where the safe-deposit boxes were kept. Anna felt a tinge of relief. Tony was sharp: if there were something truly wrong with those two men, he would pick up on it.

She was so intent on her thoughts that at first she didn’t hear the question that Mrs. Ramirez was asking her. Then the words seeped through, and she shook her head. “No, ma’am,” she said patiently. “I haven’t heard anything at all about a bank robbery in Albuquerque.”

But even as she spoke, something prickled in the back of her mind, and her eyes swung automatically to the door through which Tony had escorted those two strange men a moment ago.

“…must seem like a foolish old woman,” Mrs. Ramirez was saying, “but I just feel like these days, you can’t be too careful.”

Although they were a good thirty miles from the city, Anna’s hometown bank was not far off Interstate 40, the major highway that bisected New Mexico from east to west. Anyone who committed a robbery here in Oliver could be miles away within minutes.

“Anna?” Rena’s soft voice broke into her thoughts and brought her firmly back to the present.

“Yes,” Anna said. She focused on Mrs. Ramirez, taking the woman’s frail hand in her own two. “You can trust me, Mrs. Ramirez. The bank takes all the precautions it can. Our only concern is for the well-being of our customers and the money they’ve entrusted to us.”

And that was when they heard the first shot.

2 thoughts on “Her Badman Hero”