Hello and Happy New Year (three weeks later)! I hope that you and your loved ones had a joyous holiday season, and that the new year is treating you well.

Usually I’m not much for New Year’s resolutions; I generally prefer to be as irresolute as possible. But this year (my Year of Wow, if you read this post on the Rockville 8) I have made up my mind to be more resolved, to assert decisions where I might have previously withheld them. So I’m starting with four resolutions that I know I can live with:

(Okay, I won’t really be counting.) I am a very smiley person. 🙂 You know how sometimes you meet a friendly dog, and he perks his ears, wags his tail, and grins at you? That’s me, but in human form. I am always willing to perk my ears and wag my tail at any stranger who comes along. (Which sounds terribly inappropriate, but so be it.)

Even with my canine-like cordiality, there are times when I don’t feel like smiling at all. But there are lots of  reasons to smile every day. Smiling is contagious. It’s mood-lifting. There’s even a chance it can help us live longer. The more we smile, the more we feel like smiling. And if all of that isn’t enough, consider this: there’s nothing more beautiful than an honest, happy smile. So, in 2016, I will smile at least 100 times a day. How about you? 🙂

2. Don’t take the news too seriously.

Not that I ever do. But this year (an election year: Heaven help us), I will make a concerted effort not to get riled up, provoked, or otherwise distracted by anything in the news or on social media. Peace of mind is too important, and the quality of information is unpredictable. Not to get all dramatic and preachy – I save that for important things, like which toppings to order on a pizza (side note: onions and green peppers are the most important) – but since the days of William Randolph Hearst, truth seems to have taken a back seat to finance.

So this year, I will treat all news as if it were coming from my crazy Uncle Walt. (I don’t have a crazy Uncle Walt, but please indulge me, if only for the sake of metaphor.) I will listen with half an ear, smile and shake my head. “That’s nice, Uncle Walt,” I’ll say. “Now how’s that Napoleon costume coming along?” (Apparently, Uncle Walt has a Napoleon fixation. Interesting.)

3. Go out to the movies at least once a month. 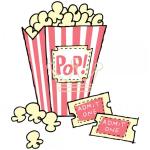 When I was young, I used to go to the movies every week with my dad. That’s how we spent our time together. And when we weren’t watching movies, we were discussing them (or books; we loved talking books). Since I’ve become a grown up (which is a silly thing to be), I’ve practically stopped going out to the movies. Why would I, when theaters are so expensive, and watching TV in my pajamas is so comfortable?

But in December, I did go out and see a film. In a theater. With popcorn that did not come out of the microwave. (I’ll pause while you get over the shock of that concept. Better? Okay, let’s go on.) And I remembered how much fun it is to sit in a darkened room, with a bunch of strangers, and see a movie on a big screen. So, in 2016, I will go out to the movies at least once a month. I still owe myself a trip in January, and I welcome suggestions in the comments.

I used to tell myself I was a person who needed to plan everything. If I didn’t plan every detail of a venture, I didn’t engage in it. And then one day, quite recently, I realized that I’d been using planning as a substitute for action. I didn’t have to go on a hike; I could sit at home and look at maps of trails. I didn’t have to buy a house; I could drive around and look at houses that were for sale. I didn’t have to write another book; I could read books about writing, and engage in endless contemplation about possible story lines.

In other words, I wasn’t acting, I was thinking. And thinking, my friends, is a terrible thing to do. (Okay, no it’s not, but for some reason I couldn’t resist typing that sentence.) But thinking can be done very quickly; when days and weeks and months get added to any given project just because “I’m thinking about it,” well, that’s when there’s a problem.

In my case, the think-don’t-act thing was mostly a result of not trusting myself. What if I go for a hike, get lost, and become prey for hunters from another galaxy? What if I buy a house and it turns out to have been built on an ancient Native American burial ground, causing the trees to come to life and my closet to become a swirling, furniture-swallowing vortex?  (See? I didn’t spend all those years watching movies for nothing!) Worst of all, what if I write a book, and nobody likes it?

There’s really only one antidote for that kind of over-thinking, under-doing behavior: recklessness. Now, in my case, “reckless” doesn’t mean bank robbery or bungee jumping, it’s more about not trying to solve every problem before it happens. Sometimes, you just have to write the story, and trust that someone, somewhere will get it. Or pick up and move to a new town, and trust that you will be able to make a life for yourself. Or rob a bank, and trust that – wait, no, let’s not do that.

So, this year, I will practice recklessness. I will write, I will hike, I will live, and I won’t waste too much time thinking about it.

Okay, there you have my first four resolutions for 2016. I’m going to continue to make resolutions throughout the year, and I’ll be posting them in this album on my Facebook page.