Cue the balloons and toss the confetti, because Her Secret Bodyguard has now sold 1000 copies!

In honor of this auspicious occasion, I’m going to move forward with plans to bring the novel out in paperback.  Thank you everyone for your help and support! 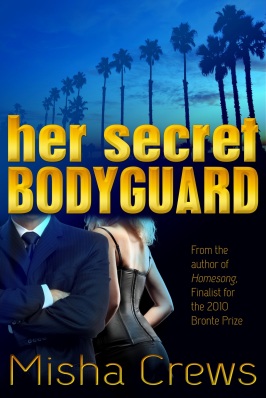 When a Special Forces veteran is hired to protect a Malibu playgirl, sparks fly faster than bullets. But will they live long enough to realize they’re falling in love?

In an exciting twist on her timeless tales of heart and home, author Misha Crews sets her latest story in Los Angeles, playground of former model Blake Sera. Although she’s not yet thirty, jaded Blake is sure she’s seen it all. Until she discovers that the man she’s been been living with is up to his neck in the murky underworld of crime. When Special Forces veteran Caleb McKenna is secretly hired to protect the glamour gal, he’s sure that Blake is just another pretty face whose only interests are sunning, funning and shopping til she drops. But soon he realizes that there’s more to her than big blue eyes and a killer smile. Can they survive their passion? Can they survive at all?

Her Secret Bodyguard – Chapter One

Blake awoke to the sound of screaming.

She catapulted out of her sound sleep and sat straight up in bed. The cry seemed to be coming from all around her, splitting the air, rising to a breaking pitch before ending as abruptly as it had begun.

Outside the open door to the balcony, the ocean was beating relentlessly against the sand. Blake’s head felt thick and full of cobwebs. It had taken her a long time to get to sleep – it always did, these days – but eventually she had fallen into a deep, heavy slumber.

Now she struggled to push sleep aside. She held her breath and closed her eyes against the moonlight that fell across the wide expanse of her bedroom floor, straining to hear past the roar of the waves.

Blake pushed the blond hair out of her blue eyes and blew out her breath in a frustrated oath. This wasn’t the first time she had heard strange yelling in this house. And she knew she wasn’t imagining it, no matter what Rube tried to tell her.

Suddenly there was a thump that she felt more than heard, followed by a muffled cry. Both had come from downstairs. Heart pumping, Blake threw back the duvet and put her bare feet against the cool wood floor. Sinister visions of various kinds of criminal activity were dancing through her head like sugar plums, filling her with dread. Rube was a nice guy, but she couldn’t say the same about all his friends. God only knew what was going on downstairs.

She stayed where she was, poised at the edge of the bed, as if trying to sense through the soles of her feet what was happening beneath her. But silence reigned again, and she knew that she had to get up to see what was going on. This might be Rube’s house, but she lived here too, damn it. There was something strange going on, and she had a right to know what it was.

She took a deep breath and stood up resolutely. Her dressing gown was hanging silkily over the arm of a nearby chaise lounge. She slipped it on and belted it firmly. It provided more a sense of security than a feeling of warmth, but that was fine with her.

Part of Blake – the part where common sense lived – cautioned her to tiptoe to the door, so that whoever was downstairs wouldn’t realize that she was awake. But a larger part shunned the idea of sneaking around her own bedroom in the middle of the night. She had a right to be here, so why should she be the one to creep around?

With her head held high and her shoulders back, she strode upright across the bedroom floor and put her hand boldly on the doorknob. But there her nerve failed, and she turned the knob slowly and quietly. Before pulling the door open, she put her ear to the crack to see if she could hear anything. Again, there was nothing.

There’s a whole lot of nothing going on around here, she thought, with a bravado that she absolutely did not feel. She opened the door.

The hall stretched dimly in front of her, towards the second-floor sitting area which overlooked the living room below. She took a deep breath and stepped forward, moving silently down the short hallway, Adrenaline had made her feel almost supernaturally alert, but the fear that was streaming its way through her veins had the opposite effect, making her clumsy and shaky. Suddenly worried that she would trip over her own feet, she stopped, pressed herself against the wall and closed her eyes.

Fear was not a natural emotion for her. Her mother used to joke that, given the choice between fight or flight, Blake would pick fight every time. But this was different. She didn’t know what she would find downstairs, but it couldn’t be good. The temptation to run was seductively strong. At this moment she wanted nothing more than to turn herself right around, lock herself in the bedroom and pull the covers over her head until the bad men went away. Her legs trembled with the need to carry her away to safety.

But that was when she heard the voices.

They were coming from downstairs, and there were at least three of them. She opened her eyes and realized that she could see light flickering at the end of the hallway. She crept forward again until she reached the end of the corridor.

The beach house was built with typical Malibu-modern architecture. Downstairs was one big open space – living room, dining room, kitchen and a sort of game-room that housed the TV and Rube’s beloved antique billiard table. Stairs led to the second floor where there was a lounge area filled with deep furniture and large potted plants. On each side of the lounge was a short hall which led to a bedroom suite. One suite was Blake’s, the other was Rube’s.

Blake hovered at the end of her hallway, not sure what to do next. Skylights in the lounge filled the upstairs with a cold, dim glow of cloud-covered moonlight, adding to the flickering light which must have been coming from the stone fireplace downstairs. There was practically zero chance that she could get across the lounge to the stairs without being seen, and a minus-zero chance that she could actually make it to the first floor. What was she going to do?

She crouched down and peered around the wall. Her eyes swept the lounge, Rube’s hallway across from her, and the narrow slice of living room that she could see. When she was relatively certain that there were no eyes looking back at her, she moved forward, scooting ungracefully along the floor until she reached one of the large, square wooden planters that sat along the edge of the upstairs sitting room.

She raised up slightly, peering over the edge of the planter, through the banister and down to the living room below. She had to stifle a gasp at what she saw.

It could have been a scene straight out of a low-budget gangster movie. A man that she had never seen before was sitting in front of the fireplace in the far corner. He was tied to one of her imported cane-back chairs. Even in this low light Blake could see that his face was bruised and bleeding. In front of him, with their backs to her, stood Rube and his executive assistant, Greg Betch. She could recognize Greg by his hair and Rube by his lack of it.

Blake had known Rube for almost ten years, and until lately she had thought that there were very few secrets between them. Sure, she’d known that some of his business dealings were somewhat shady, but that had never bothered her. For Pete’s sake, they lived in Hollywood. With all the backroom deals that went on in this town, you might as well name the place Shady Acres. But recently Blake come to realize that she’d been hopelessly naïve to trust him so completely.

This whole nauseating scenario – waking up in the middle of the night to cries of pain and fear – had played itself out before. Afterwards, Rube would disappear for a week or more. She wouldn’t know if he were alive or dead. And when he finally did come back he’d refuse to tell her what had happened.

“Don’t ask me about my business,” he’d say, doing his best Pacino impression and giving her a weak smile. It was times like those that she was afraid she might be close to hating him.

What exactly was going on in this house? Did she even want to know?

Downstairs, Rube had leaned over and was talking to the man in the chair. Although Blake couldn’t see him very well, she heard his words, recognized his posture and she easily guessed what he was doing. He was lecturing. His hands were undoubtedly templed in front of him, and he was waving them up and down in an almost beseeching gesture. She had been on the receiving end of his lectures too often not to recognize it.

“Jake, why are you lying to me?” Rube was asking. Blake shifted so she could hear a bit better. “Greg says he saw you with his own eyes.”

The man in the chair – obviously Jake – shook his head wearily. “It wasn’t me, Rube, I swear to you. On my mother’s life I swear to you….”

“You were talking to the Feds,” Greg shouted. He gave Jake a vicious backhand across the mouth to punctuate the last word. Jake’s head flew to one side and stayed there as he wept quietly.

Blake flinched as if she had felt the slap stinging her own skin. She’d known Greg almost as long as she had known Rube, and she’d never even heard him raise his voice before tonight.

A chill of fear crept over her as she looked down at the men she thought she knew so well.

“Sorry, Rube,” Greg replied, straightening his coat. “I thought you said she never wakes up.”

“Hardly ever.” Rube was using his don’t-challenge-me voice. “And I don’t want her involved in this mess, so you do what I tell you and keep it down.”

“Sorry,” Greg said again. “This guy just ticks me off.” He took a deep breath and ran his hands over his hair, as if to calm himself.

In an unconscious answering gesture, Rube touched the bald spot on the back of his head. “Yeah, well, me too, but let’s keep it quiet, okay? Jakey here – ” Rube kicked Jake’s foot lightly. “Jakey here is going to tell us what he told the Feebs, and that’s going to be the end of it.”

“And it’s going to be the end of him, too,” Greg said hotly.

Jake began nodding his head fiercely. “I’ll tell you, Rube. I’ll tell you everything you want to know.”

And he started talking.

Coming soon in paperback!  Available now on Kindle for 99 cents!

One thought on “Her Secret Bodyguard sells its 1000th copy!”