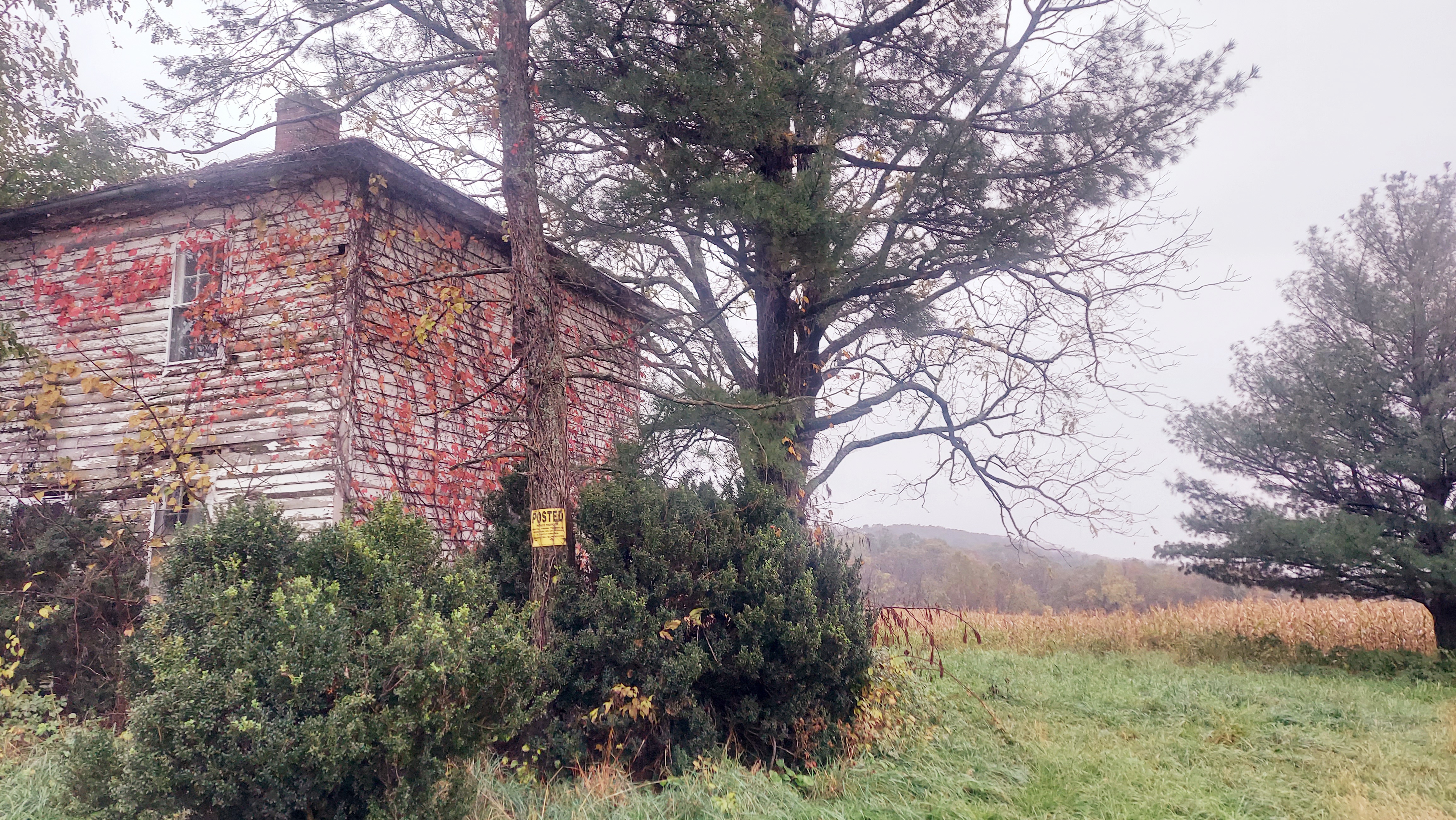 I know that the spooky season is technically over, but I “met” this house while I was wandering the countryside on the evening before Halloween, and it has completely captured my imagination. I want to write a story about it, so here goes:

In my imagination, the house is found by a photographer, a nice fellow who is a little down on his luck. One evening, while he’s looking for inspiration, he stumbles on this lonely house. Although the exterior is decayed and crumbling, the structure is defiantly resplendent in its autumn finery.

Unable to resist its lure, he ignores the No Trespassing sign and climbs through the window. Inside, he finds once-cozy rooms which have turned dank and sad through the passing of years and the lack of love.

As he pauses in the parlor, the last light of day finds its way through the overgrown windows, picking out the intricate detail of the carved fireplace. He lifts his camera to his eye, wanting to capture the moment.

Suddenly, through the lens, the fire flames to light in the hearth. He pulls the camera down sharply, looks with his naked eye, and sees only the dark, melancholy room that was there a moment ago. Slowly, slowly, he lifts the camera again.

Through the lens, he sees the dancing fire. Its glow illuminates four figures sitting in old furniture. A family: mother and father, a girl and a boy. Their heads are bowed, but as he watches, their faces slowly turn his way. Four sets of eyes, as sad and dark as the house itself, burn into his soul. His hand shakes, but the camera does not waver.

Only the little girl moves. Calmly and deliberately, she turns to face him, pulling her dress down over her knees and lifting her chin, as if offering to pose for his photograph.

He presses the shutter release.

The picture runs in a local paper the following day. The story “ghost family captured on film” is picked up by all news services, both major and minor, and travels around the world, captivating minds around the globe, sparking debate and wonder.

Although the photographer is offered millions to reveal the place where he took the photo, he steadfastly refuses, remembering the sad eyes of the family, and the trusting way that the little girl turned to him, arranging her dress just so before he took the picture.

Our photographer becomes first famous, and then wealthy. He retires from public life, buys the house and restores it. Over the fireplace he hangs a picture of the family who used to live there, the family who trusted him to tell their story with his lens, and to never give their secret away.

The photo hangs there while the photographer happily lives out his life in that house. He passes away, an old man, in the very spot where the little girl sat.

When he opens his eyes, he feels young again, full of the same energy and strength that he used to climb through the window so many years ago. He looks around, and he sees the family whose photo made him famous.

They welcome him with loving arms.

Did you like the story? 😊 What would you expect to find in a house like this one?

6 thoughts on “Once upon a time, there was an abandoned house…”